An ounce of prevention equals a pound of cure 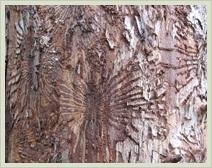 As the fungus infects the tree layer that carries water and nutrients to and from the rest of the tree, the tree's own defense mechanism becomes its downfall.

In an effort to block the fungus from spreading, the tree “plugs” areas of this vascular network. Eventually, enough of the network is plugged that water and nutrients will not make it to the rest of the tree and they will start to die.

Approved Tree Care - Services - Dutch Elm DiseaseA good example of an initial symptom of Dutch Elm Disease infection in an Elm tree is when the leaves on an upper branch in the canopy will start to yellow and the branch starts to whither in the summer, prime growth and green season. 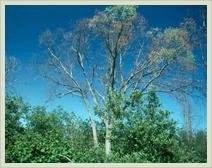 Several instances in a single tree or across multiple trees indicate advanced infection with immediate treatment and preventative measures needed.

Approved Tree Care has the experience, tools and permits to combat Dutch Elm Disease in infected trees, and to prevent infection before it happens.