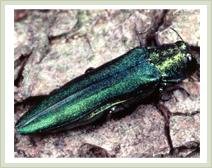 Agrilus planipennis.
If you have spent any time in the Chicagoland area over the last two decades you know the devastation the Emerald Ash Borer and Dutch Elm Disease have caused. The Emerald Ash Borer is a beetle, originally from Asia, that has gotten a foothold in the Ash tree population in and around Chicagoland. The adult beetle is a little longer than 1/4” inch long and a 1/16” wide and is shaped like a bullet; narrow and pointed at the tail end and wide and squared off at the head. The beetle is colored metallic kelly green. While the adult Emerald Ash Borer beetles feast on the leaves in the canapy of the tree, larvae do an equal if not greater amount of damage inside the tree. 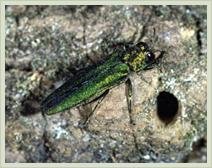 When the larvae hatch, they dig a Approved Tree Care - Illinois - Services - Emerald Ash Borerhole through the bark of the Ash tree and start burrowing and eating, just under the bark layer. These “tunnels” disrupt the tree to such a degree that coupled with the foliage loss to the adult beetles, Ash trees have been decimated at a truly alarming rate around the country and specifically in the Chicagoland area.  An Emerald Ash Borer colony can kill an otherwise healthy tree in as little 3 years. 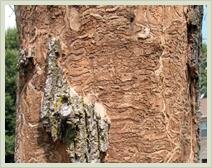 Approved Tree Care - Illinois - Services - Emerald Ash BorerIf you see the Emerald Ash Borer beetle or the tell-tale holes in your Ash trees, get in touch with Approved Tree Care as soon as possible. With several prescriptive and preventative treatments at our disposal, we have had a high success rate at bringing trees back from the brink and treating them against further infestation.